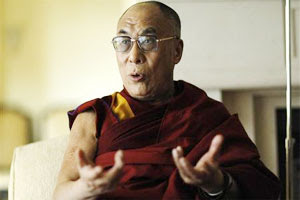 The Dalai Lama visited the White House recently and I was somewhat surprised when you consider what an unmitigated cur barack hussein obama and his coterie of misfits are. However, I thought, maybe His Holiness hoped to cure their regime of self-centered wickedness. No, as it turns out, that may not be the reason at all because the High Lama announced that he’s a Marxist.

He lives in India, a democracy and capitalist nation because the COMMUNISTS brutalized Tibet and exiled him. He visits the US where he is not reviled nor is he imprisoned. His followers are reviled and looked down upon in the largest COMMUNIST nation (which forbids the free exercise of religion) and are generally treated kindly in democracies and capitalist nations.

“Still I am a Marxist,” the exiled Tibetan Buddhist leader said in New York, where he arrived with an entourage of robed monks and a heavy security detail to give a series of paid public lectures.

Marxism has “moral ethics, whereas capitalism is only how to make profits,” the Dalai Lama, 74, said yesterday. Why is he being PAID for his public lectures? That smacks of capitalism. A good communist should give lectures only for the joy they give to others without resorting to collecting filthy lucre. Being paid for your work doesn’t sound very utopian to me. If you wish to demonstrate your personal love and respect for Marxist moral ethics why would you accept a dime in compensation for anything? He has a begging bowl doesn’t he? Sharing your labor and thus also your wisdom (for free) is the hallmark of a true Marxist. Accepting capital (the product of your labor) must further “a society reckless of the health or length of life of the laborer, unless under compulsion from society” (Marx). “In a higher phase of communist society… only then can the narrow horizon of bourgeois right be fully left behind and society inscribe on its banners: from each according to his ability, to each according to his needs” (Marx). Nowhere did Marx demand to be paid a large amount of money in exchange for speaking…

Go ahead Buddhists, have at me.
h/t michelle malkin