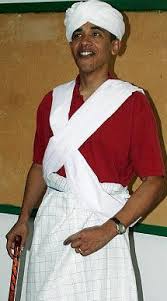 On June 2, The Fox Nation featured a headline stating, “Obama Says U.S. Is a ‘Muslim Country.’  During an interview with the French television station Canal Plus, President Obama said: “[I]f you actually took the number of Muslim Americans, we’d be one of the largest Muslim countries in the world.” He spoke those words with pride in who he relates to and to their position in the world. He directed NASA to reach out to Muslims to help them feel good about themselves. We get where he and the Democratic Party are coming from.
Sure, Muslim women love being Muslim. We non Muslim Americans get it. We simply have difficulty equating the Democratic Party squaring its love of Islam with its love of AMERICAN Women. Most Muslim men equate being an average American women with being a “whore”.

In Janet Levy’s piece on American Thinker, “The Democrats’ Anti-Woman, Anti-Gay Elephant in the Room”, she writes, “In this highly polarized, contentious election season, the media frequently portrays the GOP as anti-woman and anti-gay. The desire of most Republicans to protect the unborn has been speciously transmogrified into hatred of women and a plot to control their reproductive systems and, ultimately, their lives.

It’s what prompted Code Pink to protest at the Republican National Convention with members dressed up as vaginas to graphically bring home what they perceive as a war on women by Republicans who they claimed want to set the clock back several decades, erase the progress made by the women’s rights movement, and relegate women to second class citizenry. The Democratic Party’s friendliness toward Muslims prompted an extraordinary gathering in Charlotte, North Carolina, where the Democratic National Convention begins on Sept. 4. As part of the pre-convention festivities, a “Jumah at the DNC” was held through Sept. 1 by the Bureau of Indigenous Muslim Affairs (BIMA), an Islamic nonprofit headquartered in Newark, New Jersey. The Washington Times estimates that “between 500 and 1,000 participants” attended the Jumah, while 20,000 had been predicted to attend the entire three-day event. HINT: Their celebration did not include the rights of women.

The hypocrisy of the left’s defense of Islam is glaringly obvious when it comes to its treatment of women, which goes far beyond decisions about abortion and birth control. The left’s feminist sisters may think that Republicans want to repeal women’s rights, but the Koran (4:34) expressly states, “Allah has made men superior to women because men spend their wealth to support them.”

The Koran sanctions wife-beating with “[a]s for women whom you fear will rebel, admonish them first, and then send them to a separate bed, and then beat them.” Furthermore, Muslim women may be beaten for refusing sexual relations with their husbands.

Within the Islamic doctrine that Democrats are promoting and defending are provisions to devalue women by allocating half the share of women’s inheritances to men, valuing the testimony of a woman as half that of a man, and providing indemnities for death or injury of a women at half the dollar value of men. In Islam, women are ruled by male relatives — fathers, brothers, husbands — who restrict their movements, monitor their dress, and decide whom and when they will marry, the latter of which can be as young as six years of age.

A Muslim husband can divorce his wife by stating his wish to do so three times and is under no obligation to economically provide for her. He can have up to four wives and countless sex slaves, while a Muslim woman can be stoned for adultery, rape, or the appearance of impropriety.

However, you won’t hear Democrats spinning this at their convention…