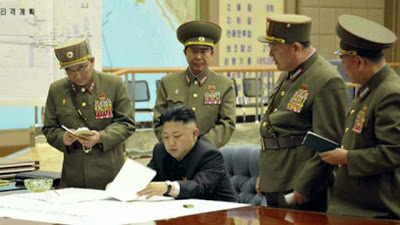 There are few regimes on the planet as universally repulsive as the Democratic People’s Republic of Korea (North Korea). Even the Central African Republic and Mali seem to have a more balanced approach to the world around them.

North Korea can fire 500,000 rounds of artillery on the South Korean capital, Seoul, in the first hour of a conflict. They have a lot of tube and rocket artillery that is emplaced in hardened shelters and they can blast a zone of annihilation over which their legions will pass. There is no denying that North Korea can do that. They can also deploy an aircraft delivered nuclear weapon which may or may not make it to the target depending on the air defense posture of the US/South Korean alliance. However, that’s about it. A nuclear weapon detonation would invite and demand a US retaliation and the US can use any one of a number of delivery systems to turn the North Korean capitol of Pyongyang into a sea of radioactive glass. Likewise, their hardened nuclear weapons storage and development areas would likely be nuked.


This is the good news.

The joint economic zone at Kaesong (north of Panmunjom in the DPRK) generates hard cash for North Korea. Essentially it is one of those situations where South Koreans cross the border every day to go to work supervising North Koreans. The border crossing hasn’t been closed to those people while North Korea busily spouts the rhetoric of war. Roughly 1,000 South Koreans work in Kaesong and things are still operating normally there. That’s the canary in the cage, and it’s still healthy.
Now, Dear Leader needs to find a way to de-escalate the situation before people get hurt. Kim needs to have something to show for the expense, aggravation and inconvenience he has caused since December. Kim Il-sung and Kim Chong-il (the previous Dear Leaders – grandpa and daddy, respectively) did the same sort of thing but not to the extent that junior has. Apparently the generals who run the kid/Dear Leader felt that he needed to boost his Dear Leader credentials at home. The population of North Korea has been on a war footing for decades, they are always on the brink of starvation and they may be complacent.
April begins the planting season and the North Korean Army grows its own food, so unless they stand down and get to work, they’ll starve next winter. Kim wants to take something away from the pageant that he’s put on to declare victory against the reactionary running imperialist capitalist lackey dogs (that would be us). But while everyone is watching the DPRK, nobody is impressed with their histrionics. It’s much the same way as a parent looks at a child having a tantrum.
Meanwhile, as the tantrum/pageant continues and North Korea threatens to detonate nuclear weapons and wipe out the US, the Daily NK reported yesterday that North Korea recently sent its director of tourism to China to drum up hard-currency paying Chinese tourists with package deals. Air Koryo will add more flights to the number of weekly flights from Beijing to Pyongyang starting 12 April. North Korean officials also have begun another round of working with Chinese officials in the provinces adjacent to North Korea to increase tourism and trade. When asked whether it is safe to travel to North Korea because of the crisis situation, the tourism director said that war definitely will not break out so don’t worry.

However, this is what the DPRK’s civilian voice of “the party” , the Korean Central News Agency had its say today in a special English language statement (in part):

“The moves of the US imperialists to violate the sovereignty of the DPRK and encroach on its supreme interests have entered an extremely grave phase. The important decision made by him is the declaration of a do-or-die battle to provide epochal occasion for putting and end to the history of the long standing showdown with the US and opening a new era. They should clearly know that the era of Marshal Kim Jong Un, the greatest-ever commander, all things are different from what they used to be in the past.” It drones on with bad English and hollow threats. I didn’t know that the fat little kid promoted himself to Marshal. I don’t know whether or not to chalk up the posters to penis envy or not.