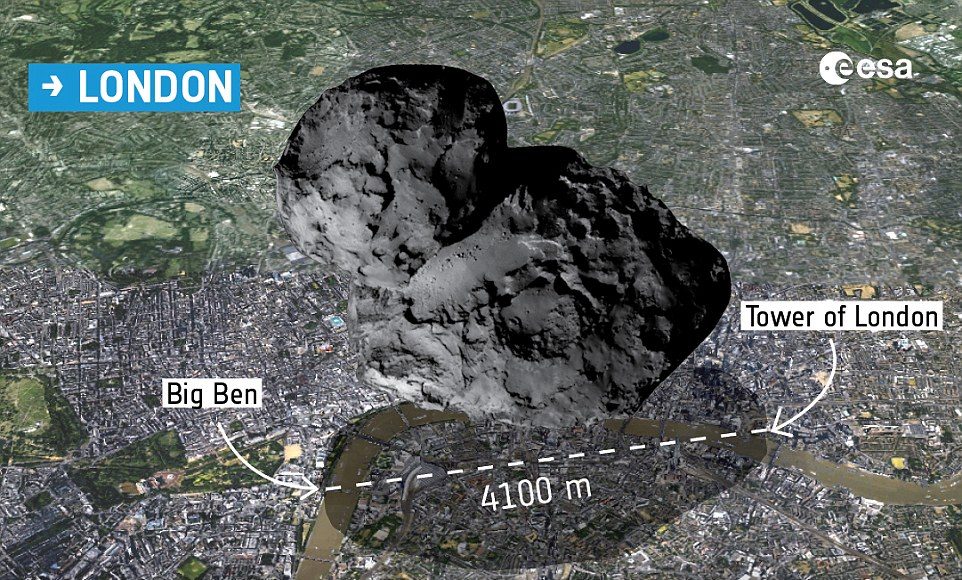 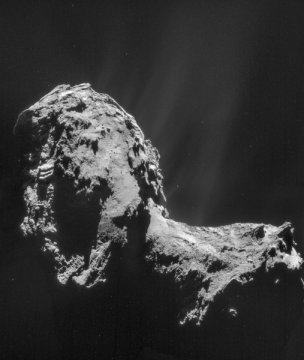 This composite is a mosaic comprising four individual NAVCAM images taken from 19 miles (31 kilometers) from the center of comet 67P/Churyumov-Gerasimenko on Nov. 20, 2014. The image resolution is 10 feet (3 meters) per pixel.

Data from NASA instruments aboard the ESA (European Space Agency) Rosetta mission have helped reveal that comet 67P/Churyumov-Gerasimenko has its own far-ultraviolet aurora. It is the first time such electromagnetic emissions in the far-ultraviolet have been documented on a celestial object other than a planet or moon. A paper on the findings was released today in the journal Nature Astronomy.

On Earth, aurora (also known as the northern or southern lights) are generated when electrically charged particles speeding from the Sun hit the upper atmosphere to create colorful shimmers of green, white, and red. Elsewhere in the solar system, Jupiter and some of its moons — as well as Saturn, Uranus, Neptune, and even Mars — have all exhibited their own version of northern lights. But the phenomena had yet to be documented in comets.

Rosetta is space exploration’s most traveled and accomplished comet hunter. Launched in 2004, it orbited comet 67P/Churyumov-Gerasimenko (67P/C-G) from Aug. 2014 until its dramatic end-of-mission comet landing in Sept. 2016. The data for this most recent study is on what mission scientists initially interpreted as “dayglow,” a process caused by photons of light interacting with the envelope of gas — known as the coma — that radiates from, and surrounds, the comet’s nucleus. But new analysis of the data paints a very different picture.

Electrons streaming out in the solar wind — the stream of charged particles flowing out from the Sun — interact with the gas in the comet’s coma, breaking apart water and other molecules. The resulting atoms give off a distinctive far-ultraviolet light.