Adventures in the Land of the Not Quite Right (part one)

The People’s Republic of China

Westerners, including me, have often referred to the People’s Republic of China as “the land of the not quite right.” What that means is that the standard operating procedure always seems to be, “that’s good enough.” But it seldom is. There is a quality control problem with things that are made in China. There was a quality control problem at the Wuhan Institute of Virology too, as reported and documented by the US State Department and others. “It’s an accident waiting to happen,” was prophetic. Except that it shouldn’t be. And the pandemic has caused untold human misery and privation. Deaths may be the smallest part of it.

Manufacturing in China for export requires outsiders (Japanese, Brazilians or ‘Westerners’) to be on site handling quality control, if the goods are to be accepted outside of the worker’s paradise.

All that notwithstanding, China is wealthy now. When I went there over twenty years ago, they rode around on bicycles. Now they drive expensive German cars (and crash into things with them). China is awash with US dollars. But that wealth doesn’t translate into a different attitude. The land of the not quite right.

The only reason that companies went to China was because it was less expensive to manufacture there than in the US, for example. That’s no longer true. In many cases, the hourly wages are higher in China now. But the US manufacturers built gleaming new factories there and they feel locked in. 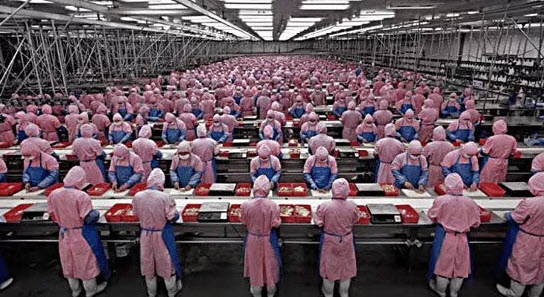 (above) Workers in “sterile conditions” in a Chinese factory wear gowns, but don’t wash their hands and wear shoes in from the outside.

In China it was not uncommon for workers to hold factory managers hostage if they wanted more pay. The Public Security Bureau (Chinese Police) responded. There was a stand-off that all parties understood.

Five or six years ago, a Catsup Making Company (which made food products in China) had a problem like this. They went to SecState John Kerry, who asked around and Catsup, Inc., contacted me. I explained that it would end eventually with the western managers and quality control people being slapped around and denied soap, but generally unharmed.

Catsup, Inc., offered large cash, I packed a bag and flew to China (first class, Singapore Airlines). I called ahead to people in the Politburo and the Security Bureau and they greased the deal with the People’s Armed Police (a component of the People’s Liberation Army), so that I could negotiate the situation. As predicted, the Americans, in this case, were slapped around, denied soap, and were released. A few ringleaders went to jail for a month or so and everyone was paid.

The word got out that Catsup, Inc. was paying good coin and I was called out regularly to their factories, making a lot of money to do very little, but I had a 100% success record resolving these disputes. I was a hero… Note that the kickback from the workers to the police required that the police stretch the end of the “crisis” until the distinguished foreign expert arrived and arranged to financially buy off the workers.

I explained all this in detail to Catsup, Inc., but they still arranged to have me go. When the Catsup Company sold off their food enterprises in China to a Brazilian firm, my adventures with that company ended.

I learned hostage negotiation directly from the hand of the great Harvey Schlossberg NYPD, in the early 1980’s, who taught the craft and his philosophy to various law enforcement and intelligence agencies who practiced it. I don’t know what Harvey would have made of this. He had a very dry sense of humor, and as a police officer, had a wit that was activated by irony. His New York cynicism would have been activated.

There is more in the news regarding the supply chain, and China slowing the flow of PPE to the USA.