China keeps expanding its territorial claims in the Pacific. They stretch all the way to Malaysia now. On March 25, Malaysian authorities detected about 100 Chinese fishing boats, encroaching on waters near the Luconia Reefs or Shoals, which Malaysia administers. The flotilla of boats, cleaning out all of the game fish on the reefs, were protected by two Chinese Coast Guard vessels. Malaysia’s navy monitored the situation, threatening legal action if the boats trespassed into its exclusive economic zone. China’s Foreign Ministry again reiterated Chinese fishing boats’ rights to operate in the area.

In times of war or crisis or as directed, Chinese fishing boats come under the control of the navy. They have mounts for machineguns and places for depth charge racks. They receive orders, weapons and ammunition from the Chinese navy.

The Luconia Reefs are more than 1,200 miles from mainland China and 60 miles from the Malaysian state of Sarawak. This incident reinforces our judgment that China can be expected to challenge every disputed claim in the South China Sea with a show of force. The Luconia Reefs are rich fishing grounds. Extensive fossil fuel deposits reportedly lie under the seabed. I expect that the Chinese will soon be building an “artificial island – then an airbase” on the reef. That’s their pattern. 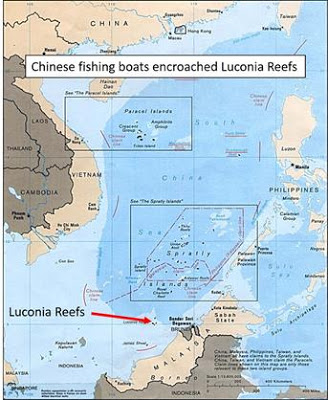 This is the second confirmed instance that a Chinese Coast Guard ship that was guarding fishing boats entered Malaysian claimed waters around the Luconia Reefs. The prior incident occurred in June 2015. There have been some rough exchanges between Malaysians and Chinese fishing boats, but no actual violence.
While I don’t think that America has an interest in being the “world’s policeman” and if Malaysia wants to allow China to walk all over them (as the Chinese are want to do), it’s up to them. However it’s good to keep in mind that China’s territorial interests keep expanding and they back up every move with military force. The time will come when Malaysia or Japan will decide that enough is enough and will sink a few of the offending Chinese fishing boats or coast guard warships.  US is still a member of SEATO (Southeast Asian Treaty Organization), and that will draw us in — unless it’s during the Obama presidency… He’ll fly to a communist country and party.