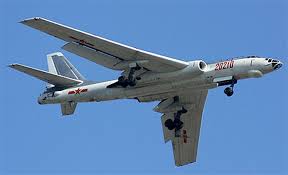 China’s defense ministry confirmed the bomber attack drills, saying that the drills come amid a growing number of Chinese and U.S. moves and countermoves in the South China Sea.

China alledges “indisputable sovereignty” in the South China Sea and said the recent U.S. Navy drills, carried out by the USS Ronald Reagan and USS Nimitz carrier groups were evidence of America’s “hegemonic attitude” in the region. Of course, without the presence of the US, nobody doubts that China would claim the entire Pacific and Indian Oceans.

“We demand the U.S. side stop issuing wrongful and hurtful remarks, stop its provocative military actions in the South China Sea and stop sowing discord among countries in the region,” A Chicom propagandist said.

The Chinese H-6 bombers are capable of carrying anti-ship missiles and Collin Koh, a research fellow at the S. Rajaratnam School of International Studies, told The South China Morning Post the bombers may have been training for scenarios including “maritime strikes on U.S. Navy carrier strike groups.”

The U.S. notice rejecting China’s claims in the South China Sea does let China retain its hold over the Spratly Islands but denies Chinese calls for territorial waters reaching beyond the 12 nautical miles surrounding the islands. The U.S. stance is in line with a 2016 Arbitral Tribunal ruling.

Following the U.S. move, Australia also filed a note rejecting Chinese claims in the South China Sea, joining a list of countries that include Vietnam, Indonesia and the Philippines.

The Chinese Communist Party had assured its adherents that Australia was a satrap of The People’s Republic of China. Recently that has changed and Australia is presently viewed as an enemy in much the same way as the United States is.