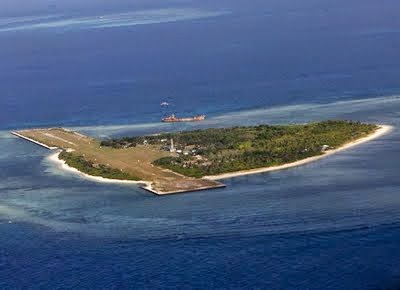 China is constructing an air strip in territory claimed by the Philippines. As they expand, unchecked by the US, who used to be the guarantor of national sovereignty but has withdrawn, it’s interesting to see how the Chinese are expanding their “big tent”.
China is interested in the Spratly Islands because there is oil under the seabed. Thus, they are building a runway on Johnson South Reef in the Union Banks of the Spratly Islands to increase their claim on sovereign Philippines territory prior to moving an oil rig in to pump the field dry.

Today, Chinese Foreign Ministry spokeswoman Hua Chunying confirmed that China is building on Johnson South Reef. “Construction by the Chinese side on an island in Chinese territory is entirely a matter that comes under Chinese sovereignty,” she said. She declined to say what China was building.

This isn’t the first clash. Sino-Philippine relations have been severely strained ever since a maritime standoff at Scarborough Shoal in 2012. The confrontation ended with Chinese ships taking control of the area of reefs, which lies some 130 miles west of the Philippine island of Luzon—well within what Manila claims as its 200 nautical mile exclusive economic zone.
Historical Context: Johnson South Reef is about 250 miles west of the Philippine island of Palawan. In 1988, China captured Johnson South Reef from Vietnam in an armed skirmish in which at least 70 Vietnamese died. China maintains a manned outpost on the island, which is barely above sea level. Philippine press sources reported that Chinese ships have been carrying large shipments of soil to the island to build it up.

The Chinese Embassy in Hanoi on 14 May issued a safety warning to Chinese firms and workers in Vietnam after angry crowds burned 15 foreign-owned factories in the south. The crowds protested China’s placement of an oil rig in waters claimed by Vietnam. At the oil rig site, the naval confrontation continued on Tuesday when ships bumped each other again. No casualties were reported.

The Japanese are watching these developments as China plans to do the same thing to the Senkaku Islands which have long been claimed by Japan.

Time for a hashtag? #WHICH SIDE IS AMERICA ON

Will America side with China, which it owes a few trillion dollars, or its treaty allies?

The government of the Philippines reached out to the Vatican for arbitration but there has been a change of heart there too.