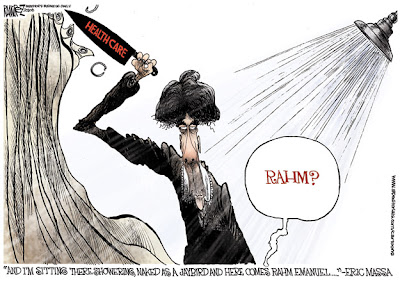 To put things in perspective, I’m no fan of Congressman Massa. However, the ethics committee of the US House of Representatives is “leaking” the pending investigation of Massa prior to ANY actual investigation because Massa planned to vote NO on ObamaCare. It’s come to that. The Democrats are eating their own if they don’t follow the Party Line.

Let’s bring the issue into focus. The House Leadership is rallying around Congressman Rangle, one of the most corrupt members of the Congress in recent memories, blanketed with SUBSTANTIATED accusations of felonious misconduct.  In the case of Massa, the Chicago Thugs, and by that, I mean the Administration of Barack Hussein Obama, show their hand and Massa is not standing up to them and forcing them to prove the allegation.

And it’s all about a NO vote on Obamacare. If Massa had changed his vote to YES, I suspect that the allegation would have been found to be unsubstantiated and it would have all vanished.

Is this the sort of Presidency of “Hope and Change” that America asked for when they elected Barack Hussein Obama?