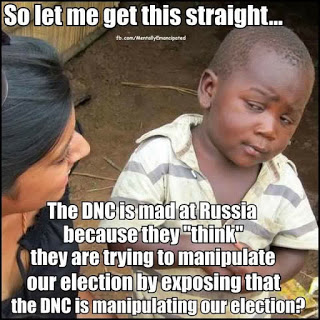 The Seth C. Rich Affair:
There is considerable danger for anyone who enters the Clinton orbit. Nothing new there. Hillary left a trail of corpses behind her and Seth C. Rich is only one of the latest (possibly not the latest). If you don’t “love Big Mother”, your time on the planet may be cut short.

Police have said they believe the motive was robbery, and that there is no evidence Rich’s murder was connected to his work. But Rich’s father has said the 4 a.m. murder, in which Rich was shot several times from behind, did not appear to be a robbery, as his son’s wallet and watch were not taken.

—————-ADVICE CORNER—————
Advice: Hillary, the next time you order a hit that is supposed to look like a robbery, have the killers take the guy’s stuff after they shoot him in the back. I swear, a trained chimp could have pulled that off better than the guys you hired.  Use cut-outs to pay inner city people to do it  instead of old SPECWAR types. The boyz from the hood will rob the victims as a matter of course and can plant narcotics on the person that they murder.  Then again, they may use the dope instead of planting it, but when you do that, at least you show that your heart is in the right place.  Worst case, if a couple of low life niggaz are arrested by the DC Police for murder – as unlikely as that scenario is – it wouldn’t even warrant mention below the fold in the newspaper the next day on page A39.
Since the murderer(s) shot Seth Rich in the back, he may not have known who did it, but, “When police found Rich, he was still conscious and breathing. He was transported to a hospital where he later died. No witnesses have come forward and police have no suspects.”

Sloppy, very sloppy, Hillary. In the book, Animal Farm, when Napoleon has the attack dogs kill Snowball, there’s no ‘conscious and breathing’ once the attack was complete.

You can always buy these people off the way you did FBI Director Comey or Attorney General Loretta Lynch. It’s cleaner, but I know, buying people off sends the wrong message.
—————-END ADVICE—————-
WikiLeaks founder Julian Assange implied in an interview that Rich, a murdered Democratic National Committee staffer, was the source of a trove of damaging emails the rogue website posted just days before the party’s convention.

Speaking to Dutch television program Nieuswsuur Tuesday after earlier announcing a $20,000 reward for information leading to the arrest of Seth Rich’s killer, Assange said the July 10 murder of Rich in Northwest Washington was an example of the risk leakers undertake.

“Whistle-blowers go to significant efforts to get us material and often very significant risks,” Assange said. “As a 27-year-old, works for the DNC, was shot in the back, murdered just a few weeks ago for unknown reasons as he was walking down the street in Washington.”