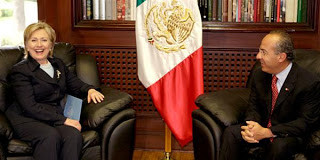 Facebook
Twitter
Pinterest
WhatsApp
Mexico is in severe distress as a nation in every measurable category. Presidente Calderon takes a page from the barack hussein obama playbook in that he blames the US for all of Mexico’s myriad of woes. In this blog I will refer occasionally to an article written September 19 by Maria Salinas, (LINK) based on a recent interview given to her by Calderon.

Generally Calderon communicates with Mexico via Twitter. Which means (to non-twitter users) that it’s a sentence or two at a time. I find that too bizarre for words, so we’ll let that stand as it is and you can make of it what you will. I don’t follow Presidente Calderon on Twitter so his jems don’t flow into my phone.
According to Salinas and others, Calderon really loves obama, but really hates US Secretary of State and potential Democratic front runner for the 2012 presidential elections, Hillary Clinton. He told Salinas, “Yes, it is very painful for Mexico that such careless statements are made — so careless, not responsible — as those by Secretary of State Clinton, because they damage Mexico’s image terribly.”
Though he denied that vast portions of his country are under the absolute control of narcotics cartels, it was a lie. I don’t know that a lie to a reporter coming from a politician constitutes a sin, but it’s a lie all the same. The police, a very large number of the politicians in Mexican state governments and a vast number of those in the Mexican federal government take money from narcotics traffickers — dare I call them bribes?
Yes, the US is the world’s largest consumer of narcotics products. A portion of those products pass through Calderon’s country on the way to their destination. And Calderon knows that if the drugs (with the money they bring) stopped flowing through Mexico completely, that his frail country operating on a frail economy, would collapse. I don’t know what portion of Mexico’s actual income can be traced to the proceeds of organized crime, but the number has to be near 20%.
I asked a person in a position to know how many businesses in Jalisco State were financed by banks as opposed to those financed by loans from organized crime. He told me that he believed they were evenly divided, and in these times of financial hardship when banks are more reluctant to lend money, the narcos are not. Make of that what you will.
By allowing unrestrained illegal immigration across the US/Mexico Border, president obama may be fulfilling one of his key goals, but those goals do not coincide with the goals most American families have for themselves or their children. Calderon favors an open border because it means that illegal aliens will work in the US and send money south to help feed their families – which can not be otherwise fed. It also means that the narcotics shipped across Mexico will find a market in the US. For without it, Mexico would founder.
Yes, Felipe Calderon deserves credit for cracking down on narcotraffickers in Mexico. No, the Mexican government is not in control in many states in Mexico. Sadly, Hillary Clinton and the US State Department was right, no matter how much it stung Presidente Calderon’s pride.