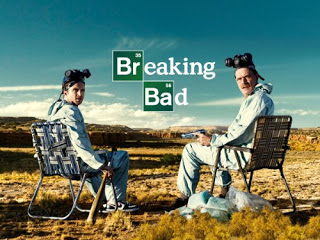 I’m not a big TV series guy. However, I need to confess that lately, I’ve become a fan of Breaking Bad. The AMC television series recently completed its fourth season and I’m told by one of the law enforcement advisors who works with the show that there will be a fifth season with 16 episodes that may show over two years.
The law enforcement types who I’m friendly with have been urging me to watch this show and I resisted (see paragraph one). Until lately. I didn’t want to watch at television show about people who cooked meth. However, friends prevailed on me. Utilizing my daughter’s Netflix account, I went back to the beginning and when there was ‘nothing on’ in the evening, retreated to the den and watched past episodes on the computer. Now I’m hooked.
For those of you who didn’t see the show, this is the plot (no big spoiler): Breaking Bad is set and produced in Albuquerque, New Mexico. It’s the story of Walter White (Bryan Cranston), a struggling high school chemistry teacher who is diagnosed with advanced lung cancer at the beginning of the series. He turns to a life of crime, producing and selling methamphetamine with a former student, Jesse Pinkman (Aaron Paul), with the aim of securing his family’s financial future before he dies. However, he doesn’t die. His cancer went into remission.
I don’t know whether it’s a dark comedy or a television drama. However there is a vast amount of ‘reality’ in the series. Watch a recap of the first two seasons below:
>>WARNING: SPOILER<<
As of the end of Season Four, “Walt” and “Jessie” are still not money ahead.