This is a review of the non-fiction book, “Liberty Factory: The untold story of Henry Kaiser’s Oregon shipyards,” Seaforth Publishing, 2021, by Peter J. Marsh

When I think of World War Two Liberty Ships, I think of Henry Kaiser’s assertion that he wanted to build a bridge of ships. Of course, that’s what he did. They didn’t have to be fast. They didn’t have to last past Victory +1. They just had to deliver supplies to a war machine, the likes of which the world had never seen before.

There were no shipyards, there was no mechanism to build over 450 ‘Liberties’ and the follow-on ‘Victory ships’ – including one built in the record time of 10 days – as well as around 150 tankers, some 50 escort carriers and countless amphibious warfare ships that the war effort needed. The book shows how something was built from nothing.

Churchill claimed that the only thing that had really frightened him during the war was the Battle of the Atlantic. Keeping open the lifeline between the US ‘arsenal of democracy’ and the UK was essential to preparations for the invasion of Europe and in the final analysis, this came down to building merchant ships faster than German U-boats could sink them.

The book is rich with photographs, documenting visually, what the author is telling us. Many of the photos are taken from Larry Barber, the retired marine editor of the local newspaper, The Oregonian, who gave them to the author. 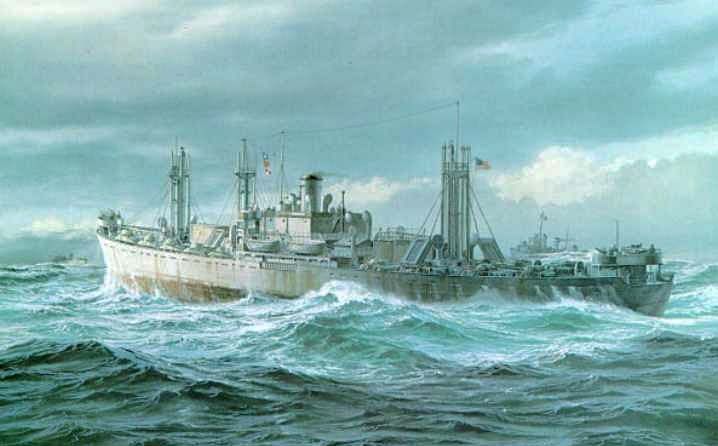 Case Study: SS Robert E. Peary was a Liberty ship which gained fame during World War II for being built in a shorter time than any other such vessel. Named after Robert Peary, an American explorer who claimed to have been the first person to reach the geographic North Pole, she was launched on November 12, 1942 just 4 days, 15 hours and 29 minutes after the keel was laid down.

The SS Robert E. Peary sailed on her maiden voyage on November 22. She was operated by the Weyerhauser Steamship Company and first served in the Pacific Theatre, sailing to Noumea, New Caledonia before heading onwards to Guadalcanal.

She sailed to the Atlantic Ocean in April 1943 and operated there for the remainder of the war on the convoy routes to Europe, ferrying prisoners of war from North Africa and serving off Omaha Beach on D-Day. At the conclusion of the war, she was withdrawn to the Wilmington Reserve Fleet in December 1946.