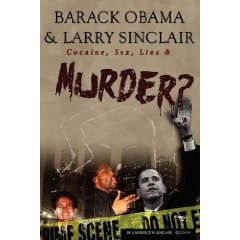 Barack Obama & Larry Sinclair:
Cocaine, Sex, Lies & Murder?
Listen to the Larry Sinclair’s interview by Pastor David Manning, a noted religious leader in Harlem.
It’s interesting to note that Barack Hussein Obama has not sued Larry Sinclair for libel/slander and that the book made it to market. What must we make of this?