The Bodies Pile Up (Mexico SitRep)

The official numbers are in. The first month of the new year ended with 904 drug-related murders in Mexico, which makes January 2010 the deadliest month since Mexican President Felipe Calderon took office in December 2006. The last week of the month was characterized by an abnormally high number of beheadings, which took place throughout the country. Nine Mexican soldiers were beheaded in Guerrero State alone. The second and third most violent days during Calderon’s term in office also occurred in January 2010, with 52 drug-related deaths on the first day of the month and 46 drug-related deaths on Jan. 29. At least that’s the official count. 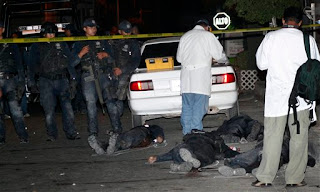 The unofficial count runs much higher since only bodies that the government counts are listed in the official death tallies. Corpses that are buried in unmarked graves aren’t listed and nobody counts the “missing”.
A US Government source, close to the matter, puts the number of dead in the past two years that can be attributed to narco-organized crime at somewhere around 30,000 people, but the sad truth is that nobody really knows. Abductions are VERY common and when people are “picked up” they are usually not dropped off alive. They simply enter the rolls of the missing.
Chihuahua has been the most violent state in Mexico for more than two years, and in January 2010 it accounted for more than one-third of all the official drug-related deaths during the month with 327. The violence in Juarez stems from the ongoing conflict between the Sinaloa and Juarez cartels over control of the Juarez Valley trafficking route into the United States. 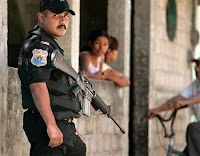 Official sources showed that throughout 2009, Sinaloa state did not have more than 100 drug-related deaths in any given month, but that changed in January 2010, with 169 drug-related murders in the state. Previously, the deadliest month in Sinaloa was July 2008, with 139 deaths as a result of the conflict between the newly separated BLO and Sinaloa cartels, which began battling each other for control of marijuana fields and trafficking routes in the state. Unofficial numbers are 3 times higher with this past month as a complete blood bath. One FBI source I spoke with compared it to Baghdad or Beruit in the bad times. Sources on the ground agree with the FBI assessment.

The violence taking place there now can be largely attributed to local gangs backed by both BLO and The Federation (Sinaloa Cartel), which are still battling each other for control of domestic drug markets, mostly in the Culiacan-Navolato metropolitan area.

With violence continuing to soar, Calderon and Public Security Secretary Genaro Garcia Luna have come under increasing political pressure to reduce the violence to a politically acceptable level.
This past week, the Mexican Government (augmented by support to a small degree by the US Government) came out ahead in terms of control over some of the narcos. Next week that victory can be easily eclipsed. It’s a see-saw battle that has no end in sight.