In “The Battle of the Century,” Stan Laurel and Oliver Hardy’s 1927 comedy classic, the boys inadvertently start a massive pie fight that soon engulfs the entire city of Los Angeles.

With chaos in the streets, Stan and Ollie quietly tip-toe out of town as if they had nothing to do with the mess they’ve left behind. 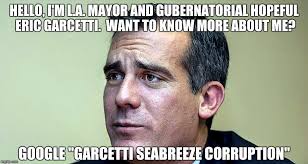 The “back to basics” mayor is basically begging president-elect Biden for a one-way ticket to Washington, hoping to put as many miles as possible between himself and the mess he helped create. With crime soaring, trash spilling into the streets, city councilors frog-marched to jail, infrastructure collapsing, budget deficits mushrooming and unfunded pension obligations skyrocketing along with a homeless population he had promised to reduce — Eric Garcetti has run out of alleys to kick the cans down. …more here 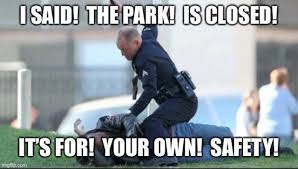 The article speculates that Garcetti could possibly punch out of the Los Angeles quagmire and land as secretary of transportation or housing and urban development in the Biden administration. He’s a man of very little talent or vision so being buried in a senior management role in the Federal Government may be just the ticket, and who knows? Maybe vice president to Kamala Harris when Old Joe just kicks off?

Then there’s Governor Newsom. Would he appoint himself to serve the remainder of the term of Senator Kamala (Ho) Harris?

Only Kentucky’s Albert Chandler ever appointed himself to the Senate and then won re-election. Voters tend to frown upon such blatant power grabs. But consider what Newsom faces in 2021, and Aunt Nancy Pelosi, his patron can only last so long before she hit’s the big adios down to hell, where she likely has a lot of advice for Satan.

Garcetti feels that once he got into the DC Swamp system that he might have a shot at the presidency in 2024. Backstabbing Ho Harris wouldn’t be something that he’d feel uncomfortable doing and you know that Big Tech would love him.

Historically, elected officials are a mixed bag. The trend is that the longer they hold office, the more corrupt that they become. The Biden Crime Family is emblematic as are the Pelosis, the Feinsteins and the Chicago Mob (pretty much everyone in Chicago politics).

Of course, they’re put into power by voters. It takes a special sort of stupid to vote in people like Maxine Waters again and again but people do.

And we end up with a mess, like the one that we’re in.