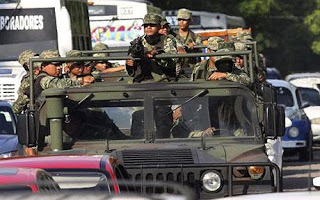 Facebook
Twitter
Pinterest
WhatsApp
Is the Merida Initiative a waste of US Taxpayer money?
During a dinner that the Mexican Attorney General hosted for a delegation from the U.S. Department of Justice, Undersecretary for the Interior, Geronimo Gutiérrez Fernandez said that the $1.6 billion Mérida Initiative, the United States’ major effort to help Mexico fight the drug war, was too hastily crafted to be effective. (UK – Daily Telegraph)

Mexican soldiers patrol the streets of Acapulco (Reuters)
Undersecretary Gutiérrez has also said that he believed that Mexico had lost large portions of Mexico to the drug cartels, who were the de facto government. (op cit) The comments may not have been intended for a mass audience, but he’s right. Mexico does not control a great deal of the territory within its national boundaries. If you don’t believe me, take a vacation though Bloody Mexico on your own and see with your own eyes – hear with your own ears.

The Mérida Initiative (also called Plan Mexico by critics) is a security cooperation between the United States and the government of Mexico and the countries of Central America, with the declared aim of combating the threats of drug trafficking, transnational organized crime and money laundering. The assistance includes training, equipment and intelligence.

In seeking partnership with the United States, Mexican officials point out that the illicit drug trade is a shared problem in need of a shared solution, and remark that most of the financing for the Mexican traffickers comes from American drug consumers. U.S. law enforcement officials estimate that US$12 to 15 billion per year flows from the United States to the Mexican traffickers, and that is just in cash, i.e., not including the money sent by wire transfers. Other government agencies, including the Government Accountability Office and the National Drug Intelligence Center, have estimated that Mexico’s cartels earn upwards of $23 billion in illicit drug proceeds from the United States. (Wikipedia)

The vast majority of illegal narcotic products (meth, cocaine, heroin, marijuana, etc.) crosses the Southern US Border. Would the US have been better served to have focused on FIRST blocking our Southern Border before moving on to provide billions in aid to Mexico?