Benghazi Redux (in a Nutshell) 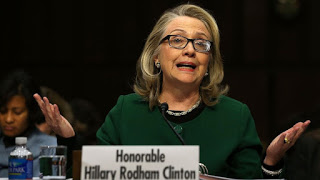 Facebook
Twitter
Pinterest
WhatsApp
If you’ve been reading this blog for any time, you will know that I explained this story years ago and it’s somewhere in the Virtual Mirage archives, but I won’t bother to look it up to say, “I told you so”. The motivation for the attack on the consulate at Benghazi was a gold heist and it was CLEARLY known to SECSTATE Clinton and to Barack.

I don’t know who came up with the plan but whoever they are couldn’t figure out how to pour sand out of a boot…but I’m sure that the planner was very progressive.
Essentially the attack on the Benghazi Consulate and later the CIA base (about a mile away) started as Clinton worked to cover her rather large ass.
(Politico)

Clinton sent Ambassador Stevens to Benghazi to secretly purchase US made Stinger Missiles (MANPADS – Man Portable Air Defense Systems) with gold.  Under Clinton’s direction, the State Dept had supplied the Stingers to Ansar al Sharia in Libya without Congressional approval.

So, to bring you up to speed, skinny, wimpy, homosexual Chris Stevens is running around Benghazi with gold in the back of his Range Rover and no effective bodyguard, trusting in the good will of jihadis. What could possibly go wrong?

SECSTATE Hillary Clinton had brokered the INITIAL Libya deal through Marc Turi private arms dealer based in Arizona. It should not surprise this blog’s readership that some of the Stinger Missiles ended up in Afghanistan where they were used against our own military.

On July 25th, 2012, a US Chinook helicopter was downed by one of them. Not destroyed only because the  Taliban didn’t arm the missile’s warhead. The helicopter didn’t explode, but it had to land and an EOD team recovered the missile’s serial number which led back to a cache of Stinger Missiles kept in Qatar by the CIA, which Clinton’s State Department drew from. So the breadcrumbs lead back to one of the most corrupt politicians in Washington DC, intent on being the next US President.

Are any of you surprised?
Was the American ambassador in Libya raped before being killed?