Barney Frank, Prop 8 and a rant 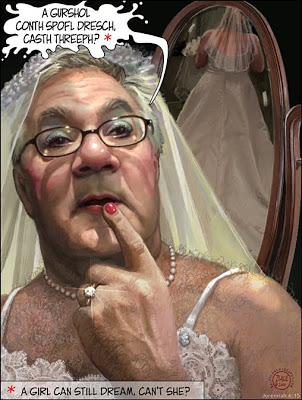 Is Rep. Barney Frank (D-MA) missing out on his chance for a California beach wedding?
(h/t Dale)
Yes
The Federal Ninth Circuit Court of Appeal put same sex marriage on hold.
Homosexual activists, Proposition 8 proponents, welcomed a federal appeals court decision Aug. 16 to stay U.S. District Judge Vaughn Walker’s recent ruling invalidating the 2008 voter-approved constitutional amendment declaring that only marriage between a man and woman is recognized in California.
Lawyers for Proposition 8 had filed court papers the morning of Aug. 16 asking the U.S. Nonth Circuit Court of Appeals to put a hold on Judge Walker’s Aug. 4 decision in the Perry v. Schwarzenegger (challenge to Prop. 8) case, which would have paved the way for same-sex marriages to resume in California this week. The Ninth Circuit Court’s three-judge panel said the court would hear the Proposition 8 challenge the week of Dec. 6.
The case could have wide-reaching ramifications for other state laws restricting same-sex marriages. Thirty states have constitutional bans on same-sex marriage similar to California’s and while the Ninth Circuit Court decision, wherever it falls, would not have to be taken as binding precedent in other circuits, it could influence similar challenges elsewhere.
So the question of just how sick our society really is — awaits the court’s decision, that will likely be appealed to the Supreme Court.

And, moving on to Rep. Barney Frank (D-MA), character counts, though there are those who would put him forward as the poster child for character NOT counting (see artist’s rendering above). An individual can be fairly judged on lifestyle. However, he needs to be voted from office for other reasons that are more pressing. Barney Frank and Chris Dodd are largely to blame for the economic crisis now facing this nation. They used the CRA to force banks into lending money to people who were unable to handle the mortgages banks gave them. This resulted in large scale default which had a domino effect on Wall Street. In Frank’s position on the Finance Committee, beginning in 2006, he pronounced them “sound” – and on the whole mortgage and lending practices issue, one can trace that all the way back to Carter.