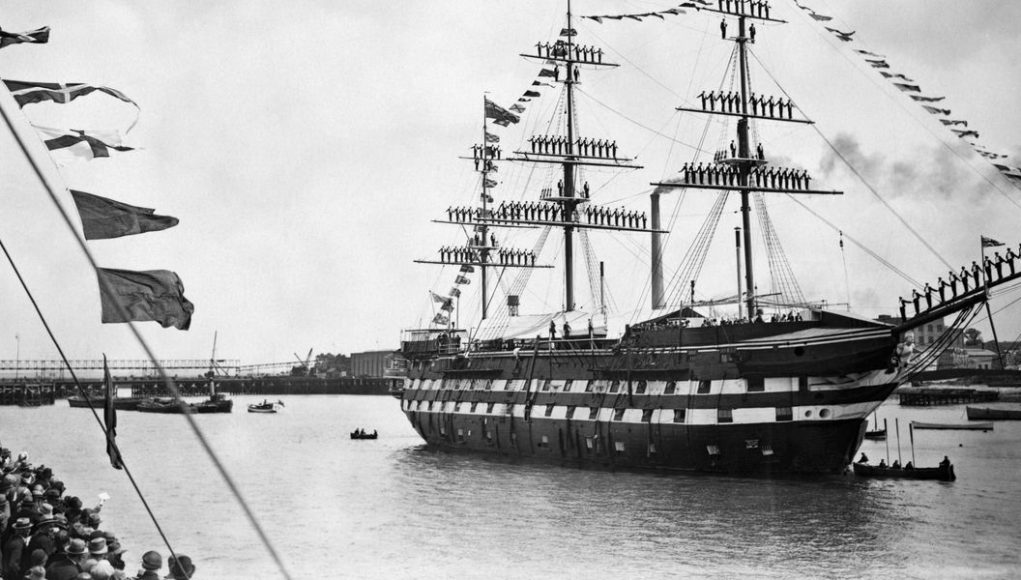 From the days of fighting sail

In the early days of the Age of Discovery, the risk of collision on the open sea was zero, even if navigation was not yet fully developed, and instead of sailing to the Spice Islands, one sailed around the world just because one had made a wrong turn.

That didn’t change much when navigation improved, because the number of ships on the seas was not yet as high as it had been steadily increasing since the late 18th century. But if it did come to that, there was only one problem, there was no radio communication, and the chances of someone coming to the rescue were purely coincidental. Communication was by the line of sight only, so if a ship came over the horizon as one was sinking, it was purely by chance. It could even be that this ship was the enemy, who was more intent on sinking or capturing you than coming to your aid.

In the event of two ships approaching each other, there was no need at that time for formal rules of engagement as to who should change course, when, and how. It was more the case that some ships carried lighting at night in the form of the star lantern or a mast lantern to signal their presence, but this was only the case in crowded waters, and the reluctance to display lights at night was due to the desire to avoid giving away the ship’s presence to the enemy or pirates.

Two fighting vessels in collision off a headland in choppy seas, by D. Tandy 1798-1805

Collisions in the harbor or in the Navies anchorages, on the other hand, were much more likely, and the rule was, that whoever is smaller gets out of the way first. The first larger and more frequent collisions did not occur until the first steamers appeared. While a steamer was much more maneuverable than a sailing ship, let alone much smaller than a ship of the line or even an Indiaman, these ships were actually required to clear the way, but unfortunately not many adhered to this rule, which led to accidents.

From the early 19th century onwards various nations introduced “conventions” for the behavior of ships in the event of a possible collision, such as ships sailing before the wind giving way to ships sailing close to the wind, because ships sailing before the wind have greater room for maneuver in choosing the course they can take. These “conventions” were mainly set at the national level, and even then they were not binding but based on what might be called good seamanship. It was recognized that in a situation where each vessel should have some idea of what the other might do, there had to be some form of coherent action to avoid a collision.  Ships do not collide with such impunity, and both ship owners and insurance companies would like to see some kind of code that would bring order and predictability to a potential collision situation.  Before a uniform set of international rules was developed, there were different practices, conventions, and informal procedures developed by different maritime nations in different parts of the world.

Off the Long Island coast, near Fire Island, the British steamer Scotland bound for Liverpool ran into the smaller vessel Kate Dyer in an evening collision.  The Kate Dyer sank in fifteen minutes and Scotland, having saved seven of the sunken ship’s twenty-man crew, tried to make it back to New York Harbor but ran aground in a sinking condition off Sandy Hook, New Jersey.

As a result, there were inconsistencies and even contradictions that led to unintentional collisions. There was also no standardization of ships’ navigation lights for operation in the dark and of navigation marks in the shipping channels, which led to dangerous confusion and ambiguity between ships at risk of collision.  With the advent of steam-powered ships in the mid-19th century, the regulations for the navigation of sailing ships had to be supplemented by regulations for the navigation of motor ships. Sailing vessels are limited in their maneuverability in that they cannot sail directly windward or into the eye of the wind and are not readily navigable in calm conditions. In contrast, steamships could maneuver in all 360-degree directions and are maneuverable regardless of wind or calm.

Terrific Collision, between the Steamboats Dean Richmond and C. Vanderbilt near Rondout, on the Hudson River, Sept 19th, 1867 by which Dean Richmond was sunk, and several lives lost, by Currier and Ives 1867

These laws were aimed at steamships, which were coming into more and more use at the time. In the US, Congress included lights for sailing vessels in the regulations for ships in US waters. Ten years later, an Act of Parliament in Britain required colored sidelights for sailing vessels, and fog signals had to be given by steamships with the ship’s whistle and by sailing vessels with the fog horn or bell, while a separate but similar measure was also taken in the United States, although British maritime law was also adopted in what was probably the first attempt to reach international agreement on maritime practice.

In 1863, a new set of rules was drawn up by the British Board of Trade in consultation with the French, initially aimed at regulating traffic in the English Channel. A year later, these rules were adopted by more than thirty shipping countries in a large-scale attempt to reach an international agreement. In the US they were called ‘Rules to Prevent Collisions at Sea’; this is the first time the term has been used. In the UK they became known as ‘The Rule of the Road’.

Individual countries introduced their own minor changes to the rules, so it was still complicated for navigators to comply with them, but in 1889 the United States convened the first international shipping conference to consider standardization. this came in 1899 but a proper and binding agreement did not come until after the Second World War.

It is chastening to think how many ships were lost at sea prior to the first attempt to force captains to show lights at night. In 1836, a British Royal Commission made recommendations that every steamship should carry lanterns visible in all directions between sunset and sunrise, but it was another two decades before anyone took the issue seriously.

By then 3064 collisions involving British ships were recorded in one year, resulting in the loss of 9 steamships and 270 sailing vessels. It was Captain Evans who finally solved the problem in 1849, by devising a forward-facing white masthead light for steamships within an arc two points abaft the beam on either side, along with the red and green sidelights on port and starboard sides, showing from right ahead to two points abaft the beam. Sailing vessels, however, would need only to carry a single white light until 1858, when both red and green sidelights were finally made mandatory for these vessels, too.

The first international Maritime Conference in 1889 finally saw the USA and other nations recognize the importance of navigational lights on ships to be carried aboard ships, and it set detailed criteria based on the size and type of vessel. The purpose of the lights is to allow other vessels to determine both the length and the heading of travel of the ship so that in darkness they can avoid the vessel in its entirety, and take evasive action should the lights indicate. The standard system is green lights on the starboard (right) side, red on the port (left) side, and white on the aft (back) and bow (front). The lights need to be fully visible head-on and 22,5 degrees abaft the beam.

The Introduction of effective navigation lights undoubtedly prevented many unnecessary collisions at sea, especially in channels with heavy shipping leading to fewer sinkings and consequent loss of life.