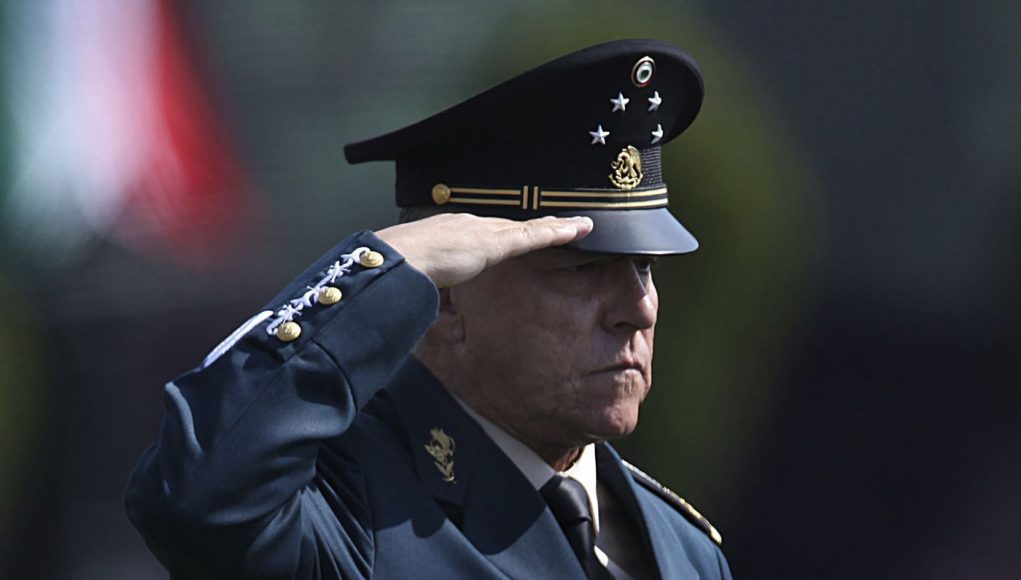 Historically, going back forty years and longer, the Mexican Army managed a lot of the drug trafficking through the country. Each Mexican State had an army general in charge of it and the traffickers kicked up to the army (SEDENA). They tended to keep a lid on the murders, and the tourist cities were safe enough to encourage los Yankees to come and spend their hard earned money.

Mexico’s former defense minister (captioned above) is facing four drug-trafficking and money-laundering charges in U.S. federal courts, related to the manufacture and distribution of heroin, cocaine and other illegal substances, according to an indictment made public Friday.

The ex-minister, retired Gen. Salvador Cienfuegos, was detained Thursday at the Los Angeles International Airport. The news was a bombshell in Mexico, where the military remains one of the most trusted institutions.

(Los Angeles Times) “His arrest has raised the startling possibility that top Mexican military officials have secretly been working with drug traffickers during most of the U.S.-backed offensive against cartels that began in 2006.

The public-security minister in the first six years of that effort, Genero Garcia Luna, is now awaiting trial in New York on allegations of accepting bribes to help the Sinaloa Cartel. He has pleaded not guilty. Cienfuegos served as defense minister in the following administration, from 2012 to 2018.

“We had this underlying construct of a fight of good against evil, a clear line of confronting them as monolithic blocks,” said Falko Ernst, the senior Mexico analyst for the International Crisis Group. “With Garcia Luna, that comes crashing down” – and the arrest of Cienfuegos further undermines that narrative, he said.

Mexico is the No. 1 source of heroin and methamphetamines reaching the United States, and a major corridor for cocaine and fentanyl (which originates in the People’s Republic of China). Since 2007, the U.S. government has provided the country with about $3 billion in security and justice aid through the Merida Initiative.

One of President Andrés Manuel López Obrador’s (AMLO) campaign promises was to stop the war on drugs in Mexico, deferring it to the US as an American domestic consumption problem. AMLO was generally good to his word, backing the Mexican army (SEDENA) and navy (SEMAR) down from their roles in narcotics enforcement.

Unfortunately for Gen. Salvador Cienfuegos, the efforts of the Trump Administration against high level traffickers, continues.