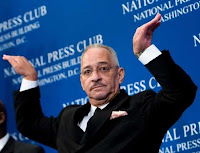 (Dear Leader’s Struggle with
his hatred toward America)
Rev. Jeremiah Wright, Obama’s advisor and
spiritual Leader for 20 years:
“God Damn America”
The song the school children have been taught to sing (blasted across conservative blogs including my own) say that “He wants to change it, to rearrange it.”
Why?
Because Dear Leader holds very deep seated resentments toward America and “Americans” in the general sense. The First Lady said in a widely publicized statement that the first time she felt like an American was when her husband was elected President of the United States. That’s quite some statement and reflects how both she and her mate feel about their country. As a result, Dear Leader is all talk and aggressive inaction when it comes to national security. Other leaders have noticed and mock his childish agenda–even if our own media haven’t.
Even the French are now worried that Dear Leader will not do what is necessary to protect the US (and by extension, France) from the the Iranian nuclear threat. The only “evil” he has ever been able to internalize is that of the “social injustice” of capitalism and America, taught to him all through his life by his mother and father figures like Frank Marshall Davis and Jeremiah Wright.

Psychologically, he can’t protect us, even if he wanted to. He is bound up in and obsessed with his own personal, unresolved conflicts and caught up in a destructive

repetition compulsion; and having a Daddy who was interested in protecting little Barry’s world is not something he can relate to.
He has enough political “will” to support the ranting Zelaya (yet another Chavez wannabe south of us) and, interestingly, always seems to come down on the side of those who dislike and even hate his own country. Dear Leader needs to stop dreaming and wake up to the reality in front of him…but pointing out something like that to a person acting out his own personal psychopathology and grandiose fantasies on a world stage, while little children are singing praises to his wonderfulness and the left is reinforcing and enabling and excusing that gradiosity, would be therapeutically ineffective.
So is it really a lack of political will?
Or is it political grandiosity and malignant narcissism playing itself out on a world stage? All the world’s his stage now–a stage he can use to act out those malignantly narcissistic defects manifested in his cold grandiosity and in his “selfless” devotion to pursuing what the left insists on calling “social justice”; but which in the cold light of reality always turns out to be the pursuit of power over others.
(h/t to Dr. Sanity who I drew on for portions of this blog posting – but not attributed in detail)