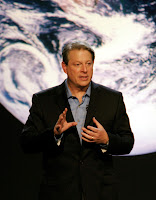 The image is of a rider, intent on arriving at a place, but he’s ridden his horse to death. Still he sits astride the dead animal, whipping its flanks.  THINK AL (Inconvenient Truth) GORE.

Nobody knows where gore picked up his recent data, but he took the pulpit once again. Now, Gore says, “Global data show last month was the second-hottest January since surface temperatures were first measured 130 years ago and the last 10 years were the hottest decade since modern records have been kept.”

I think the Motion Picture Academy needs to strip him of his Oscar (in addition to the Peace Prize, which was also won by Barack Hussein Obama, who, by coincidence, did every bit as little as Gore did).

Sen. Lindsey Graham, R-S.C., who’s been working with Democrats to craft a compromise, says the current so-called “cap and trade” bill won’t pass. In an op-ed piece Sunday by The New York Times’ Thomas Friedman, Graham is quoted as saying that Republicans need to support some kind of climate bill even if they don’t believe in global warming.

Really, Sen. Graham. Why don’t you think Cap and Trade will pass? Maybe because it’s based on a completely FALSE premise and now Americans understand that it will further gut their already fragile economy?

I agree that the US needs to decrease or eliminate it’s dependence on foreign oil. The best way to begin to do that is to transition to Nuclear power to fill our electricity needs nationally. It’s environmentally green, it’s proven safe and it’s even renewable to some extent. Secondly we need to open oil rich areas such as the California Coast and the Arctic National Wildlife Refuge to exploration and drilling. The Barack Hussein Obama administration opposes these measures. Why would that be?

The Gore/Graham axis is a philosophy of fools based on PATENTLY FRAUDULENT information. The blush is off the rose, gentlemen. Time to acknowledge that the data has been gaffed to the point that NOBODY knows what the truth is — but it doesn’t seem to favor Nobel Prize winning Al Gore.
Time for Gore to retire to his energy hungry home in Tennessee. Per SNOPES, Gore’s home uses 20 times more energy than the national average. I don’t think Al wants you to know that. Maybe it could be considered an “inconvenient truth”.