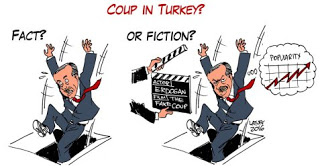 Facebook
Twitter
Pinterest
WhatsApp
The Turkish armed forces released a statement that the attempted coup d’etat officially ended at 16:30 local time on the 17th. However, the government deployed 1,800 special police forces to Istanbul to protect government buildings and critical installations.

President Erdogan was quoted as describing the coup attempt as “a gift from god to cleanse the army.”

Some in the US are concerned that their own government gave the green light to the dissenters within the Turkish Army, all the while knowing that the coup was a sham and a trap. I think that those concerns are justified. The European intelligence agencies would agree with you if that’s what you think.

News agencies have reported the public details of the coup and counter-coup. Justice Minister Bekir Bozdag said authorities have detained 6,000 people. Reportedly another 3,000 are wanted. The BBC reported those under arrest include 29 generals and 20 colonels. Some 2,700 judges have been removed from office. The judges are employees of the Justice Ministry. As a profession, since at least 2010, their rulings in a variety of cases have blocked some of Erdogan’s initiatives that departed from or contravened Turkey’s secular constitution.

Several pointed out the irony that Erdogan has tried to suppress social media, but had to rely on an iPhone to rally support for a countercoup.
The mosques received and responded to Erdogan’s iPhone message. Their broadcast summoned the devout into the streets at 01:30 in response to Erdogan’s appeal to the population to resist the coup. Without the broadcasts from the mosques, the coup might have succeeded. Little basis remains for arguing that the majority of Turks are committed to the secular ideals of Ataturk.
Late information indicates that a coup team attempted to capture Erdogan on the night of the 15th, but he narrowly escaped. Another report is that his executive jet and its F-16 escorts were intercepted by pro-coup pilots, also flying F-16s, who did not shoot them down. A successful decapitation operation might have altered the outcome of the coup attempt.
Erdogan’s gloat over the army is a portent of a devastating purge. The Turkish armed forces will be of little value to NATO until the so-called cleansing is complete. The security forces will be distracted from counter-terrorism work by the need to watch the army.

Concerning Erdogan’s program to pass an Islamist constitution and institutionalize other Islamist practices, the countercoup provided a stronger mandate to Islamize the Turkish constitution than Erdogan could have expected in a national referendum. Erdogan’s government will become more authoritarian.

If Erdogan accelerates Turkey’s conversion to an Islamist state, he might rethink last week’s hints of normalized ties with Syria and Iraq. Thousands of Muslim men saved Erdogan’s government. He might interpret that as divine guidance.

One of the generals under arrest is the former commander of Incirlik Air Base. That is the Turkish air base that the US uses for air operations over Syria. One or two Turkish officials implied that the US was sympathetic to the plotters or had knowledge of the coup attempt and did not warn Turkey.
Turkish relations with Russia are likely to improve. On Russia’s initiative, Russian President Putin had a telephone conversation with the President of Turkey, Recep Tayyip Erdogan, according to Russian official media.

“In connection with the attempt in the early hours on 16 July to overthrow Turkey’s democratically elected authorities with the use of force, Vladimir Putin stressed Russia’s position of principle that anti-constitutional actions and violence are categorically unacceptable in the life of a state.”

Several commentators over the weekend discerned similarities between the governments of Putin and Erdogan as sham democracies that thinly cover authoritarian governments. The similarities are a matter of style, not substance. Erdogan is motivated by Islamic devotion in his practice of power politics. Turkey has supported Islamic terrorism in Syria, which puts him on the opposite side of Putin and Russia. He might interpret the survival of his regime as a sign that he should continue that support.
Putin’s ideal is a modern version of czarist Russia. He recognizes when a beleaguered neighbor and former enemy would be grateful for an outreach, especially when it would annoy NATO.

One side benefit of having traveled widely is that I get reports from people I know who are on the ground – just about everywhere. Bartholomew, Patriarch of Constantinople, the first among equals and head of the Eastern Orthodox Church, left Turkey about an hour before the coup. He’s in a safe refuge in Slovenia now.

Orthodox friends of mine from Greece and elsewhere have been discussing how they anticipate persecution from the Turks now that Erdogan will be establishing a caliphate in Turkey. The Turks have a tradition of persecuting and killing Christians (recall the Christian Armenians who were slaughtered in vast numbers by the Turks in that genocide.) I don’t know if will happen on that scale again. 1.5 million dead Christians is a lot of bodies to cover up in this day and age, but with European governments willing to look the other way, a sharia compliant UK and the Obama Administration willing to look the other way, who knows?