A Week in Review

Facebook
Twitter
Pinterest
WhatsApp
The Turkish (aborted) coup-de-etat
The Turks will stand with brother Muslims against the infidel. We know that. Being a member of NATO conveniently helped them keep the Russians at bay and sometimes it’s necessary to pick between the worse of two infidel groups.
The marriage between the US/NATO and Turkey is therefore one of convenience and so long as it works for both parties, and the US pays big bucks in “rent” of air base space and “baksheesh” (bribes) to appropriate officials, there is an understanding.
An autocratic Muslim government is the default setting in Political Islam. It’s what they prefer, and that has been demonstrated over and over again across the Middle East. The Turkish Constitution calls for a secular government that is overseen by the military as the custodian of freedom. After the events of last night, they’re going to need to consider re-writing that document because there will be a purge of all the freedom loving, secular army officers — executions in front of pockmarked walls.

Of all the Islamist groupings, the Turks have always been my personal favorite. I get along with them, see their perspective and to the extent that an outsider can, I understand the culture. But I have no interest in traveling there these days. After the Turks balked at allowing the 4th Armored Division to land in Turkey and cross into Iraq (First Gulf War), I reconsidered their position in regard the US.
When traveling to Germany, take note. You will see more Turkish flags flying in that nation than German flags. What does that mean? Who really runs Germany? One might ask whether they’ll suffer the same fate in terror-ridden France or if that territory (Germany) has already been ceded to Islam? The lack of terror attacks and the vast number of rapes of German women (ignored by the press) suggests who is in charge there.
Nice Terror Attack
France needs to get more serious about security and it has to come down to vetting and expelling. I realize that’s a gargantuan task, given that the French have been so welcoming to Islamists for so very long. Time to fix the mistake, or just as Pres. Hollande said, “get used to terror attacks on the streets.” I don’t have much more to say about it.
Backlash
We’re sorry – So sorry

(Fox News) SEDRO-WOOLLEY, Wash. – The sheriff of a county about 70 miles north of Seattle says a restaurant owner has asked that law enforcement no longer dine there.

Skagit County Sheriff Will Reichardt said on Facebook that after four deputies finished lunch at Lucky’s Teriyaki in Sedro-Woolley Thursday, the owner asked them not to eat there anymore.

Reichardt says the deputies were told that customers didn’t like law enforcement there. The sheriff says his chief deputy called the owner later Thursday and says the request was confirmed along with a request to spread the word among other law enforcement agencies.

Now that nobody but dirtbags go to Lucky (not quite so lucky) and the owners have been boycotted by the small town, they are saying that it was all one big mistake. 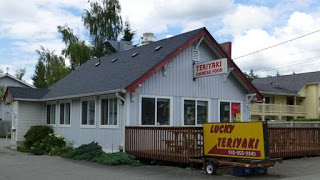 Small, one-off family businesses such as Lucky Teriyaki rely on the good will of the public in a small town, particularly when there are other restaurants in town selling the same fare. It was a bad move on their part and I don’t know how successful they will be walking it all back.

I went on Yelp and apparently there are death threats from locals against the business, which is not comfortable that the Sheriff’s Department will promptly respond if called. Karma kicked over their dogma.

My neighbors on the one side are both lawyers, and they rent the place. They are also black. I asked them if they were going to drive their late model Mercedes Benz automobiles to the closest rage day event to protest. James just shook his head and said, “LL, those are just a bunch of worthless niggers. Why would I have anything to do with them?” Why indeed? “What about the criminal referrals you could get from them if you mingle?” He chuckled, “Well there is that.” 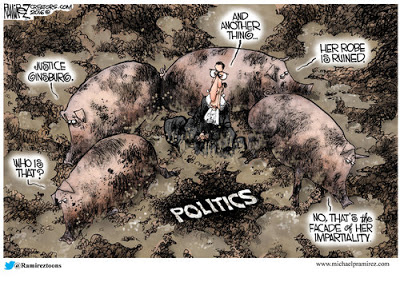 Justice Ginsburg (83) may be a bit senile. She really doesn’t like Republican Party nominee, Donald Trump.

Ginsburg’s remarks to CNN as well as to the Associated Press and The New York Times created a highly unusual week at the Supreme Court. Not only was it unprecedented for a member of the current court to delve so deeply into a presidential campaign, but a statement expressing regret is also quite rare.

“Justice Ginsburg of the U.S. Supreme Court has embarrassed all by making very dumb political statements about me. Her mind is shot – resign!” Trump tweeted.

Ginsburg was appointed to the high court by President Bill Clinton in 1993, and is now the senior member of the liberal wing and leading voice countering conservative Chief Justice Roberts.

Maybe Hillary and Bill were calling in a chip by having a Justice of the Supreme Court go rabid against Trump? Or maybe she’s senile. Once Trump is president, she needs to retire. If Hillary wins, she will be Chief Justice…