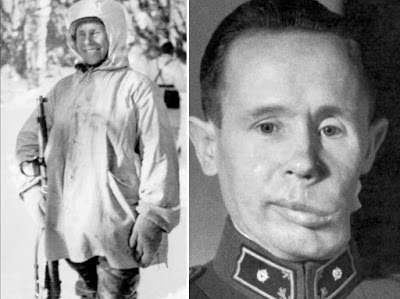 Finnish Army Sniper Simo Hayha is an unsung hero in many places but not in Finland.

Hayha used an old personal rifle with iron sights for his sniping and inovated in many ways to perfect his concealment…one among them was to keep a mouthful of snow to prevent his breath from misting and giving away his position.
In a little over three months, Simo shot and killed 500-542 Russians from positions of concealment. Not to take anything away from Kyle, Hathcock, York or other American greats,  but no conversation about snipers can ever be complete without the mention of Simo “White Death” Hayha.
Eleven days before the end of the Winter War, he was shot through the jaw and remained in a coma until the peace treaty between Russia and Finland was signed. He lived to be 96.