A Review of Facts Marine Corps veteran John “Chickie” Donohue was sitting in a Manhattan bar in November 1967 when the bartender grumbled that American soldiers in Vietnam could really use a pat on the back and a cold beer. And within days, Donohue set out to do just that.

He quickly got a job on a merchant ship hauling ammunition to Vietnam. Then, with a duffel bag full of Pabst Blue Ribbon and Schlitz in tow, he set out on his 8,000-mile journey. However, things immediately got off to a rocky start — when Donohue drank all the beer himself. 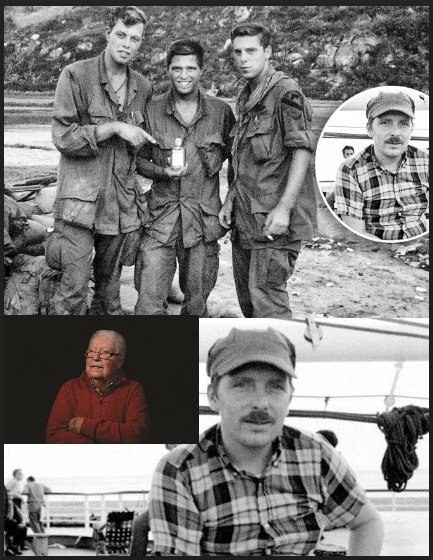 Then, after restocking, he managed to find the companies his neighborhood buddies were serving in and talk his way onto Army jeeps and helicopters to make it through Manila, Saigon, and III Corps through II Corps, all the way up to I Corps and Khe Sanh. At every turn, military personnel had no idea what to make of Donohue, who was dressed in a plaid shirt and corduroys and often introduced himself by simply saying he had beer for guys from his neighborhood back home. 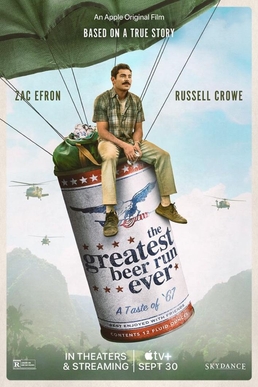 He ended up hauling his beer right through the middle of some of the bloodiest conflicts of the entire war, including the Tet Offensive — when he came under fire from North Vietnamese forces. But in the end, Donohue fulfilled his mission and shared some cold beers with his old friends on the frontlines. Then he went home.

The Greatest Beer Run Ever is an upcoming American biographical action comedy film co-written and directed by Peter Farrelly based on the book of the same name by Joanna Molloy and John “Chickie” Donohue. The film stars Zac Efron, Russell Crowe, and Bill Murray.

It will have its world premiere at the 2022 Toronto International Film Festival on September 13, 2022, and will be released in select theaters and on Apple TV+ on September 30, 2022. 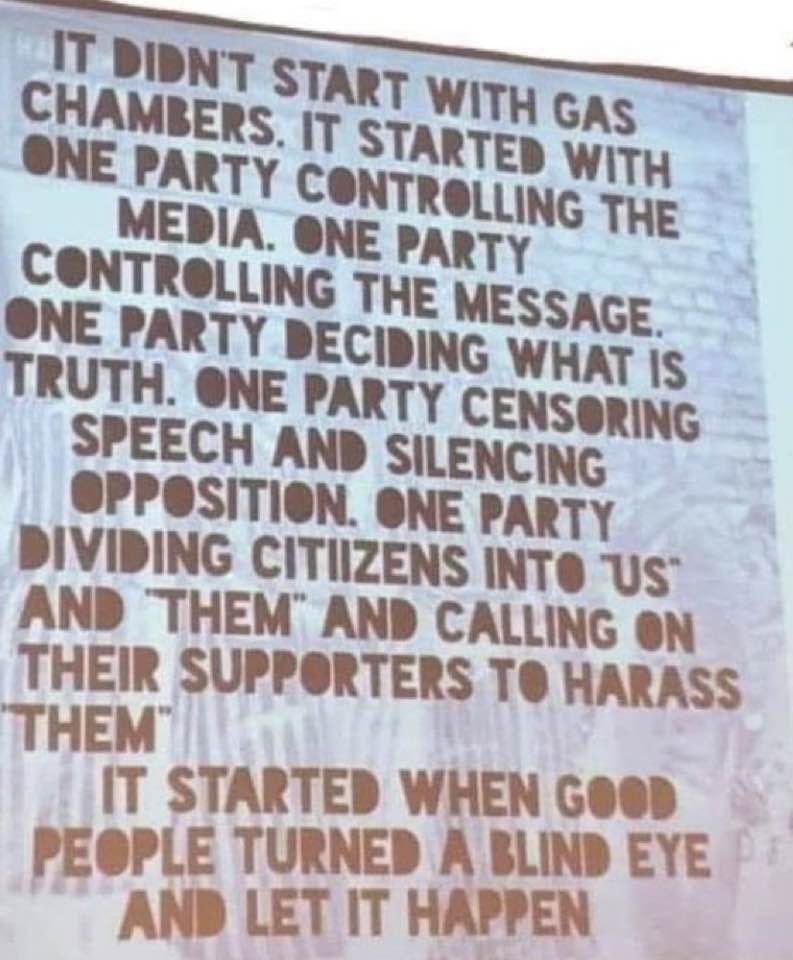 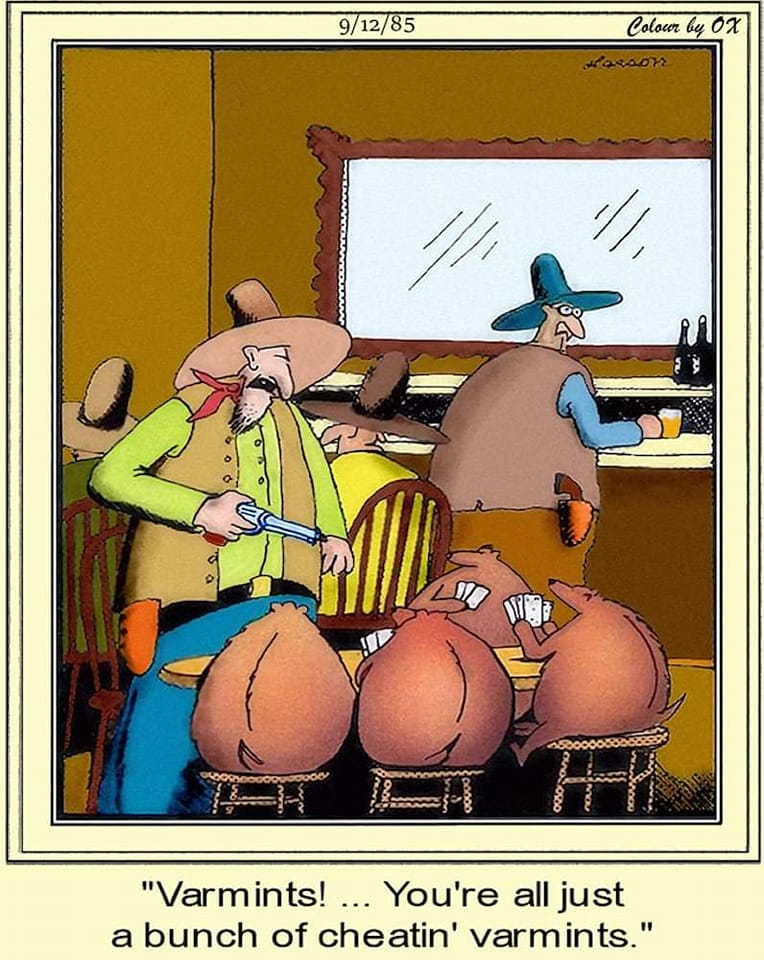 I have made no comment about the current round of accusations against President Trump, because, at this point, the truth is obvious, and you all know the drill.

Nonetheless, for the sake of completeness, let us consider the allegation that the President, by carrying documents into his private residence after leaving office, violated the Presidential Records Act (“PRA”), 44 U.S.C. § 2203

You need not take my word for anything. Follow the links. Read the opinions. They are clear enough.

“Since the President is completely entrusted with the management and even the disposal of Presidential records during his time in office, it would be difficult for this Court to conclude that Congress intended that he would have less authority to do what he pleases with what he considers to be his personal records.”

Judge Jackson ruled that a president’s discretion on what is personal rather than official records is far-reaching and solely his, as is his ability to declassify or destroy records at will.

“Under the statutory scheme established by the PRA, the decision to segregate personal materials from Presidential records is made by the President, during the President’s term, and in his sole discretion.”

This is before we even reach the question of whether classified materials, once declassified by the president, can even be alleged to be unlawfully in his possession.

A decision to challenge a president’s decision to destroy Presidential records lies solely with the National Archives and is not subject to judicial review.

The Presidential Records Act does not even allege that the National Archives may do so for records the President deems to be personal.

Even if the National Archives were to challenge the president’s decision, and the attorney general were to initiate an enforcement act, it would be a civil procedure and carry no criminal penalty. No one goes to jail.

The search warrant the FBI enforced sought two types of records: classified materials and records created during the Trump presidency.

The records Trump held at Mar-a-Lago were both declassified by him and deemed personal by him.

Moreover, both declassification and deeming a record personal are solely and wholly within the president’s discretion: a document is declassified when he says so, as he says so, and no one gets a veto.

It is not something he has to prove, and, more to the point, the judicial branch does not have the authority to review his decision.

The accusation is utterly without merit, and utterly nonsensical.

If I can read the prevailing law, and see how clearly and unambiguously any case against Trump is void and frivolous, so can the most skilled legal minds in the nation, including lawyers in the DOJ and FBI, so can any judge or magistrate signing off on these clearly illegal and clearly unconstitutional search warrants.

These are fishing expeditions, both against Trump and against anyone who advised or aided him.

It is most likely that the regime seeks to recover documentary evidence that would convict Biden, Clinton, Obama, Pelosi, and so on of misdeeds and abuses related to the stolen election and the various impeachment hoaxes, using the FISA to eavesdrop on political opponents, all of which were grossly illegal. 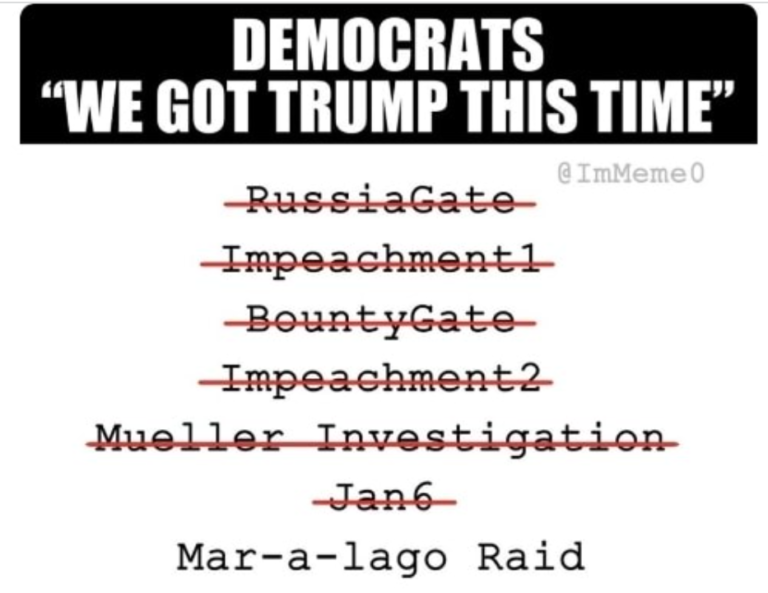 Like the Russia hoax, where not a scintilla of evidence was brought forward of any sort of collusion or conspiracy; like the Ukraine hoax, where not even a coherent allegation of any high crime or misdemeanor was ever made; like the Russian bounty hoax, where the allegation was unsupported; like calling the gathering of unarmed protestors waved into the capitol building “an armed insurrection” or asserting police officers died in the minor scuffle that resulted; like calling soccer Moms terrorists for objecting in public meetings to drag queens and pedophiles grooming their schoolchildren; the allegation that Trump mishandled the very documents it was in Trump’s sole power to decide how to handle is utterly and completely vacuous, senseless, and false.

It is such a stupid allegation, that one cannot even say it without logical self-contradiction: the man who solely decides what documents he may possess is in possession of documents he did not give himself permission to possess, despite that he says he did, and no court has authority to review his decision or challenge his say-so.

These are the same people, mind you, who punished and silenced anyone wishing to take ivermectin for the Wu Han Flu, or was created in a lab.

All of these statements have since been admitted to be utter lies and total fabrications without any figleaf of excuse. None have been publicly retracted by those who made these statements. No one who hounded the truth into silence has been punished, nor even reprimanded.

The absurd allegation of Trump mishandling classified document does, please be it noted, follow the pattern established by Clinton, who did indeed conspire with Russia against American interests; and by Biden, who did indeed abuse power in corrupt dealings with Ukraine; and by both, who did indeed attempt to overthrow a duly elected president by riots, that is, armed insurrections against both state and federal government, burning police stations and courthouses, and besieging the White House for days at a time.

Because let it not be forgotten that as Secretary of State Clinton did indeed mishandle documents, and by using a private server to store and transmit them, she did indeed expose them to foreign actors.

Biden, in a Hitlerian speech, accuses all opponents of Hitlerism.

They accuse others of what crimes they commit.