A Note on Sealed Indictments 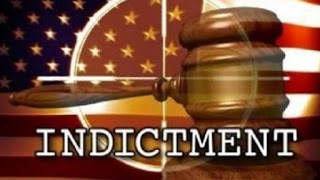 Facebook
Twitter
Pinterest
WhatsApp
One of our blogging friends asked me to comment on an allegation that the US DOJ is sitting on 40,000 sealed indictments.
The Federal court system is sitting on 40,000 sealed court actions and there is a big difference between the two. A major case could have dozens of search warrants (an authorization in writing by a judge to search a specific location for specifically enumerated evidence which would show that persons committed (a) felony(s). Since almost every crime enumerated in 18USC is a felony, it’s not difficult to get a search warrant. These are often sealed so the defendant can’t read the affidavit and learn who is cooperating with the government. There are also grand jury subpoenas that are generated in almost all federal cases and there could be a thousand in a complex financial investigation. Those are often sealed as well.
In the criminal justice system, it all comes out in trial. It’s not a FISA court. And an indictment is not a conviction. It’s an allegation.
Let’s take a moment and differentiate between state courts and federal courts. They different with different crimes and different bodies of law. My experience with the California Court System and the Federal Court Systems are roughly equal. Going into great detail on what those differences are and how they play out would take a (thick) book. Suffice that they are different.

There are essentially three kinds of grand juries. Blue ribbon grand juries are usually made up of citizens nominated for one year terms by judges and look at specific government processes to determine whether or not there is a problem. They rarely delve into criminal matters. Criminal grand juries, made up of citizens like you, chosen because you are licensed drivers, sit as investigative bodies (investigative grand juries) and as accusatory grand juries, which issue true bills of indictment. The Federal System always uses grand juries for indictments, and state systems tend to use preliminary hearings unless it’s a complicated organized crime case/gang case, etc.
I have no idea how many sealed indictments the US DOJ is sitting on but wouldn’t be surprised if there are 1,000(s) nationwide. That would leave 39,000+/- grand jury subpoenas, search warrants, returns to search warrants, proffers, and other documents out there. Those numbers wouldn’t surprise me at all and they’re manageable by the courts.
The systems (state and federal) both have 14th Amendment/due process time requirements to bring the case to a speedy conclusion ONCE CHARGES ARE FILED. Investigations are timed-out by the statute of limitations, which varies based on the system and the crime. There are not statutes of limitations in homicides – but the federal government has very few homicide cases. Most of them take place on Indian reservations.
Thoughts?