A Look Forward and Backward What about ISIS-Khorasan, or ISIS-K?

As with Syria, you can’t tell the players without a program…and that program changes frequently.

Washington branded the Haqqani network as a terrorist organization in 2010. Sirajuddin Haqqani, leads the network at present.  Sirajuddin is also the Taliban deputy leader for the eastern provinces – on the same command level as Mullah Baradar, the head of the political office in Doha, who was released from Guantanamo by Barack/Biden during the years of Obamanation in 2014.

Sirajuddin’s uncle, Khalil Haqqani was in charge of the network’s foreign financing and up to yesterday (and maybe today) is in charge of Kabul security and has been designated by the new revolutionary government in Afghanistan as a credentialed “diplomat”.

ISIS-K is led by Shahab al-Mujahir, formerly commander of the Haqqani network headquartered in North Waziristan in the Pakistani tribal areas, (Northwest Frontier Province). He cobbled together a force of non-Afghans: Iraqis, Saudis, Kuwaitis, Pakistanis, Uzbeks, Chechens, and Uighurs.

Everyone in Afghanistan wants to be Khan (king).

It is the beginning of a never-ending bad dream. Joe Biden and the Pentagon have managed to birth a new terrorist haven, destroy much of U.S. strategic deterrence, and alienate our allies and much of the country.

In the hours after the horrific deaths of 13 service members, we have been reassured by our military that our partnership with the Taliban to provide security for our flights was wise. We were told that the terrorist victors share similar goals to ours in a hasty American retreat from Kabul. We were reminded that Afghan refugees (unlike U.S. soldiers) will not be forced to be vaccinated on arrival. Such statements are either untrue or absurd.

On the very day of the attack that killed American troops, the sergeant major of the U.S. Army reminded us in a tweet that diversity is our strength, commemorating not the dead, but Women’s Equality Day. If so, then is the opposite of diversity — unity — our weakness? Will such wokeness ensure that we do not abandon the Bagram airbase in the middle of the night without opposition?

The chief of staff at the Office of Naval Intelligence warned the ONI’s active duty and retired service members that they must not criticize Biden, their commander in chief, over the Afghanistan fiasco. The office correctly cited prohibitions found in the Uniform Code of Military Justice barring any disrespect shown to senior government leadership. (I guess that means me —)

Indeed, a lieutenant colonel in the U.S. Marine Corps was relieved of his command for posting a video accurately blaming military and civilian leadership for the Afghanistan nightmare.

Yet until Jan. 20, retired top brass had constantly smeared their elected commander in chief with impunity.

Recently retired Gen. Michael Hayden retweeted a horrific suggestion that unvaccinated Trump supporters should be put on planes back to Afghanistan, where they presumably would be left to die. Hayden earlier had compared Trump’s border facilities to Nazi death camps… (more here)

Identify the Tank – no, not a Hetzer 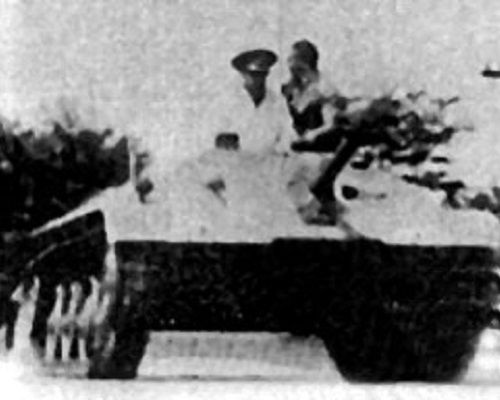 This one might be hard for you. Let me assure you that I’m having to work to try and stump you guys.

The French Debacle in Indochina

The American fiasco in Afghanistan can’t be compared to anything else. It just can’t. And now CNN is declaring Slow Joe Biden to be the greatest American president as the propaganda machine steps up to cover for the walking corpse and his band of misfits.

However, the situation caused me to pull “Street without Joy: The French Debacle in Indochina”, by Bernard B. Fall, a prominent French historian and war correspondent, off the shelf and crack it open.

When I reached Page 22, and ran onto his comments on the Franco-Thai War, I thought to myself, “self, maybe the bloggers would have some interest. Maybe they forgot about Thailand’s war against France?” I don’t always speak to myself that way…

Quoting Mr. Fall, “Open warfare between French Indochina and Thailand began on January 9, 1941. The French at first lost some ground but began to counterattack as reinforcements arrived along the Thai border. On the seas, one old French cruiser sank one-third of the whole Thai fleet in a naval engagement off the island of KohChang on January 17, and Japan, seeing that the war was turning against its pupil and ally, imposed its “mediation” between the two parties. A cease-fire began on January 28, followed on March 11, 1941, by an agreement in which the French were forced to surrender to Thailand three provinces in Cambodia and two provinces in Laos.”

First, let me point out that the Vichy French were fighting Thailand,  to clarify the situation. 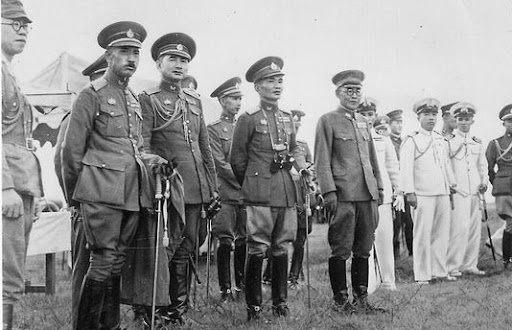 Following the Fall of France in 1940, the military government of Thai Major General Plaek Phibunsongkhram took the initiative to regain the “lost territories” that had been ceded to the French after the Franco-Siamese War in 1893.

The war between the Kingdom of Thailand and Vichy France finally broke out in October 1940, with a series of Thai aerial bombings against the French positions in Vientiane, Phnom Penh, Sisophon, and Battambang. The Armée de l’Air (French Air Force) in Indochina retaliated by bombing the Royal Thai Army along the border. 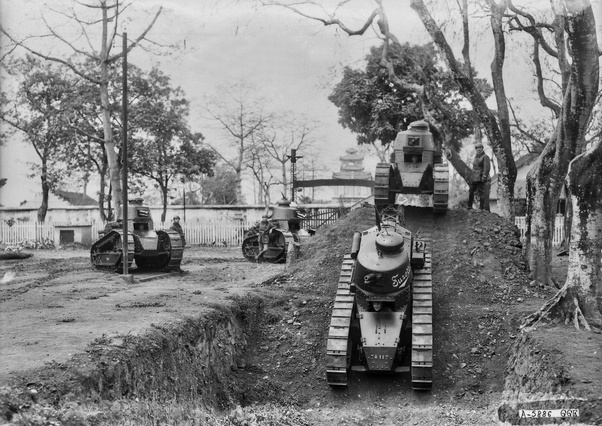 There were 70,000 French and indigenous troops in Indochina when the war started. The local levies were armed with obsolete weapons.  They had one FT-17 tank company (See the picture above of the FT-17’s in-country)

In January 1941, the French attacked the Thai border town of Aranyaprathet. Ten days later, the French launched a large counterattack on the villages of Yang Dang Khum and Phum Preav, which were occupied by Royal Thai Army. 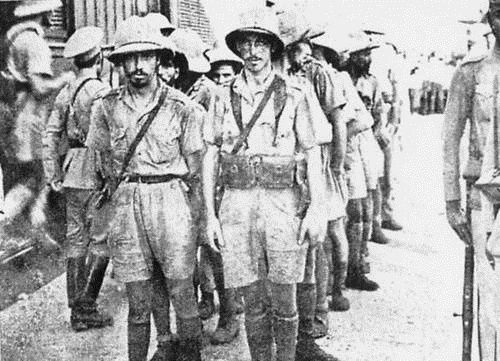 French troops in Indochina during the Franco-Thai War, 1940.

A combination of French bungling and well-prepared Thai defenses caused the attacks to stall and the French were forced to retire and regroup. 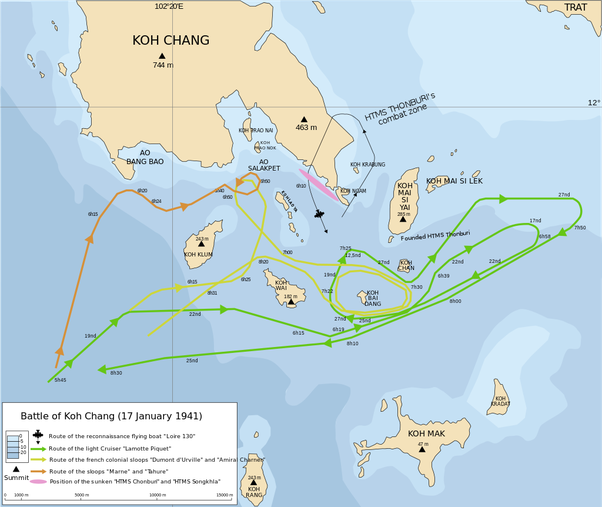 The French Navy won a decisive naval battle on 17 January 1941 against the naval fleet of the Royal Thai Navy.

A French squadron including the light cruiser Lamothe-Picquet, the modern avisos Dumont d’Urville and Amiral Charner together with the old avisos Tahure and Marne, under the command of Capitaine de Vaisseau Régis Bérenger successfully destroyed one-third of the Royal Thai Navy, as 3 torpedo boats sunk and 1 coastal defense ship grounded (HTMS Thonburi). Thai Commander Luang Phrom Viraphan, captain of the HTMS Thonburi, was also lost his life during the battle.

The French were unable to exploit the naval victory into an army victory as well.

IF Charles became King of the UK… 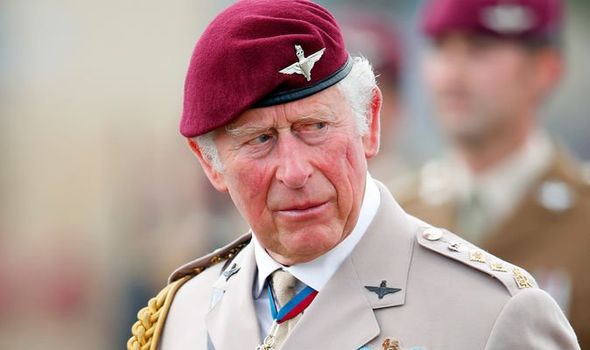 (Crown) Prince of Wales Charles wears his uniform as Colonel-in-Chief of the British Parachute Regiment.

Would King Charles be as bad of a military leader as Creepy Joe Biden is? I realize that it’s not a fair comparison,  but they are both dim bulbs.

One thing –  Charles does love to dress in uniform.