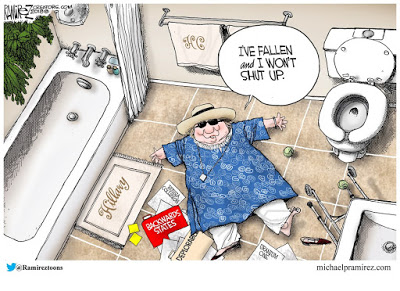 We dodged a very big bullet when we elected President Trump rather than the vile old crone. I realize that the progs and a number of RINO’s were unhappy and the deep state was shaken to its core. But can you imagine President Hillary without a shiver of anxiety that reaches to your very core?
The rampant corruption that the Clintons brought with them would have ruined the nation. Even though progressives reveled in the corruption and filth that the Hillary and crew represented, you have to think that even they must breathe a sigh of relief in retrospect of what might have been.
At the same time, I’m thankful that Hillary is still around showing people what a cupid stunt thing that she is.
Moving on (and still speaking of cupid stunts), there is Senator Jeff Flake (R-AZ), who enjoys an 11% approval rating in his own state — who is stepping aside and is not running for re-elecion to the US Senate. But WAIT! Flake is making noise about running for the presidency in 2020 against an incumbent President Trump.
You may recall that Jeff Flake jumped party ranks to support Hillary Clinton against President Trump. He is a disgrace to Arizona and one can only wonder if his hubris has any bounds at all. I spoke to a fellow Arizonan about Flake and the guy said that the senator couldn’t be elected dog catcher in his home town of Snowflake. I countered that I was certain that he could stand for election as dog catcher and win because half of the town is related to him…but that’s about all the political future that the guy has. 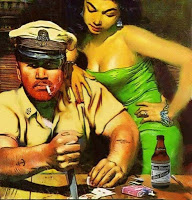 Times have changed. I recall when the picture (right) of Navy Chief Petty Officers was the norm. I’ve been gone for a while and I understand that characterization is no longer true. Sad. But a lot of things have changed – times are always changing. The Navy became very politically correct and I think that a career in that service would be exceptionally difficult today for a trigger puller.