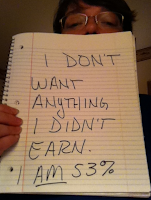 For the most part, those are the people that you see protesting that they want more free stuff from the government (which means, from the 53% who do pay income tax) fall into that 47% category. Should I be proud to be one of the people subsidizing the lives of those shiftless protesters who are camping out on Wall Street?

“The result is a tax system that exempts almost half the country from paying for programs that benefit everyone, including national defense, public safety, infrastructure and education. It is a system in which the top 10 percent of earners — households making an average of $366,400 in 2006 — paid about 73 percent of the income taxes collected by the federal government. “(LINK) 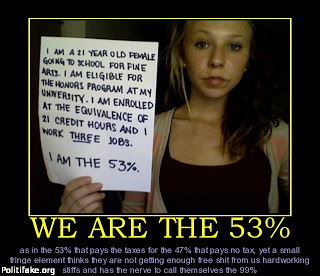 I’m thrilled to be in the category who paid 73% of the taxes. However the Obama plan to levy another 5% tax on me and my high-living crowd doesn’t seem to be quite fair when roughly half of all Americans pay no income tax at all. The Democratic Administration feels that the ‘rich’ don’t pay their fair share. 73% isn’t a large enough percentage…
Anyone who works a regular job, 40 hours a week, will end up in the 53% category of people who pay at least some income taxes.
This means that the patrons of the Obama Administration are the chronically lazy.

The so-called 99% group that now are protesting aren’t quite 99%.